The Warning Symbols study is a technical indicator developed by Barbara Star. Based on the well-known MACD, it focuses specifically on its trending and momentum properties. In Warning Symbols, MACD is analyzed in relation to the zero level, which produces important trading signals. In addition to MACD analysis, this indicator displays “warning” signals (hence the name) based on the behavior of the price plot in relation to moving averages.

In Warning Signals, MACD is interpreted based on the following factors: its sign, direction, and divergence. As in many other indicators, positive MACD is regarded here as an uptrend sign and negative MACD is meant to signify the downtrend. MACD fluctuations around the zero line often signify weak momentum in a sideways trend. When MACD is positive, its behavior indicates the momentum: rising values often indicate the rising momentum, while declining values might signify its ongoing depletion. The latter might result in a corrective pullback or even in a trend reversal, another sign for which is the divergence from the price plot. By default, the price plot is colored based on MACD values: when it’s negative, the bars are colored red, when it’s positive, blue.

In addition to the MACD, the study calculates exponential and weighted moving averages of close price, which are used to issue warning signals. It happens when:

1. "Zero In On The MACD" by Barbara Star, PhD. Technical Analysis of Stocks & Commodities, May 2016. 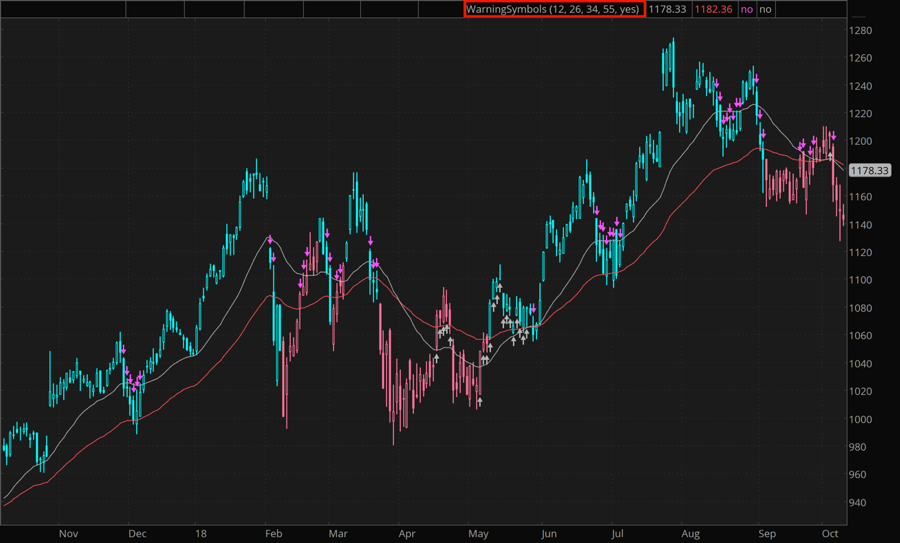 VWAP WeaknessInAStrongTrend
You may also like
MomentumPercentDiff
The Momentum Percent Diff is a momentum-based technical indicator. Unlike the regular Momentum ...
FW_MOBO_Advanced
MOBO (Momentum Breakout Bands) study suggests that all markets and stock prices have a period ...
MomentumLE
The MomentumLE strategy generates a Long Entry signal when Momentum is rising. This strategy ...