TMV is a system based on technical indicators analyzing trend, momentum, volatility, and volume (TMV).

Trend direction is defined using location of price relative to modified Keltner Channels where the middle line is SMA of typical price, and upper and lower lines are based on SMA of High-Low range and represent volatility. Trend strength is indicated by rising or falling ADX. For better understanding of trend direction and strength, price plot is colored using the following algorithm: a bar is painted in an uptick color when its ADX value is higher than the previous one and price is above SMA; downtick color, when ADX is rising and price is below SMA. In other cases, bars are colored gray.

Beside the mentioned indicators, a modified version of Volume Oscillator is calculated. Its only difference from the standard version is that the result is expressed as a percentage instead of points. This technical indicator is included in order to predict possible trend reversals: so-called volume spikes (bars having Volume Oscillator values higher than 0.5) often precede major changes in trend. For stocks being traded on heavy volume, value of 0.75 is suggested for volume spike determination.

In order to interpret TMV correctly, it is suggested that you use it with 13 period CCI. The main principle of TMV is looking for agreement between the CCI in relation to its zero line and placement of price in relation to Keltner Channels. Strong uptrend is often characterized by the following: bars are painted in an uptick color, price is above the upper Keltner Channel, and CCI is positive. If a pullback occurs, price might be expected to find support between the upper and lower Keltner channels. Conversely, downtick colored bars, price below the lower Keltner channel, and negative CCI suggest strong downtrend conditions. In this case, a possible rally is likely to finish between the lower and upper Keltner channels. 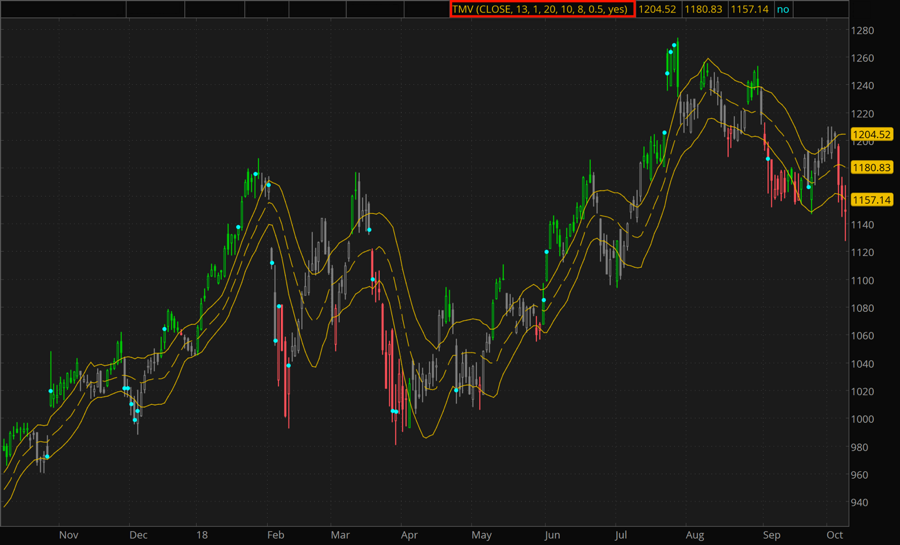 TimeSeriesForecast TPOProfile
You may also like
MomentumPercentDiff
The Momentum Percent Diff is a momentum-based technical indicator. Unlike the regular Momentum ...
SchaffTrendCycle
The Schaff Trend Cycle (STC) is a technical indicator developed by Doug Schaff as an improvement ...
SlowRSI
The Slow Relative Strength Index is a version of the classic Relative Strength Index (RSI), ...