The Middle High Low MA (MHL MA) is a trend-following moving average based technical indicator designed by Vitali Apirine. Being a combination of a regular and a modified moving average, it provides crossovers that might prove useful in making trading decisions.

The MHL MA consists of two lines: MA and MHL_MA. These are moving averages of the same type and length, however, the former is applied to the close price while the latter is applied to the price mid-range. The mid-range is defined as the arithmetic mean of the highest high and the lowest low, both found on the same lookback period. According to this study, the relation between this period and the moving average length is as follows: a lookback period of 3 to 15 bars is suggested for moving averages with length of up to 50; periods of 15 to 50 bars are to be combined with moving averages as slow as 50 to 200 bars in length. These numbers are referential and can be easily customized in study input parameters.

Interpretation of the behavior of the two lines follows the common logic of moving average crossovers. When MA crosses above MHL_MA, the study suggests an entry. Vice versa, MA crossing below MHL_MA might indicate an exit signal. The crossovers in this study tend to be produced earlier than those generated by a combination of two regular moving averages, so MHL MA is said to react faster to the price behavior and substantially reduce the lag characteristic of moving averages. 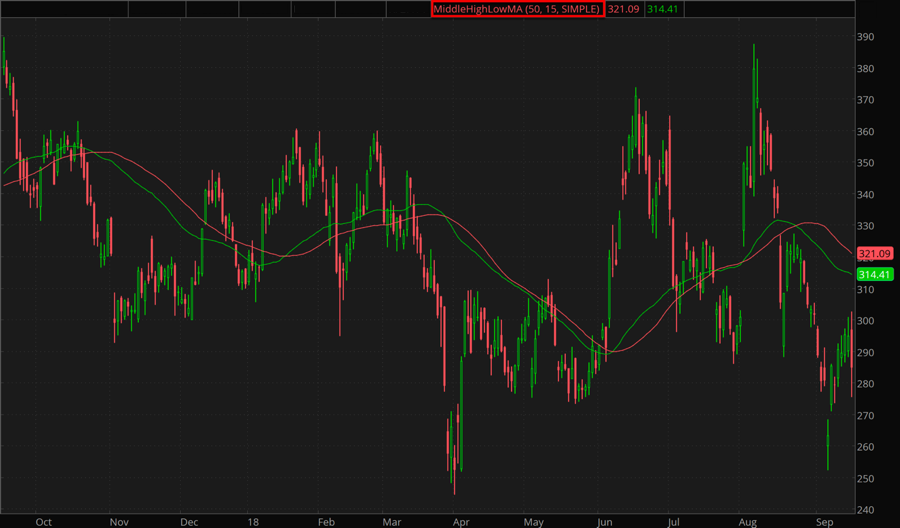 MESASineWave MktFacilitationIdx
You may also like
MomentumPercentDiff
The Momentum Percent Diff is a momentum-based technical indicator. Unlike the regular Momentum ...
SlowRSI
The Slow Relative Strength Index is a version of the classic Relative Strength Index (RSI), ...
FourDayBreakoutLE
The Four-Day Breakout LE strategy is designed by Ken Calhoun. The strategy adds a buy to ...