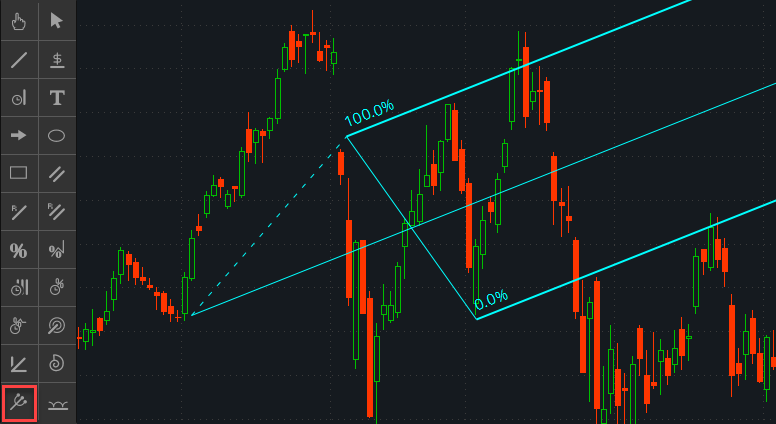 Andrews' Pitchfork is a channel-based analysis technique developed by Alan Andrews. It is plotted using three points, each marking an important pivot point. It is suggested that one of the following schemes be used: in an uptrend, trough-peak-trough; in a downtrend - peak-trough-peak. First two points define the trendline, last two points define the channel. After the last two points are connected, the channel is completed, and the median line is added, the plot indeed resembles a fork. The main rule of using Andrews' Pitchfork is the same as for the channel: in the uptrend, the upper channel line might serve as resistance, while in downtrend, the lower line might be used as a potential support level. The handle (median line) shows the strength of the trend: in strong uptrend conditions, price tends to be above the median line while in strong downtrend, below.

In order to add the Andrews' Pitchfork to chart, choose it from the Active Tool menu. Specify begin and end points of the trendline and then specify the third point which will set the channel width; the channel will develop automatically.

This section allows you to add extra parallel lines to the channel. These can be located within the channel and outside it.